Azerbaijani authorities crack down on pro-war demonstration in Baku 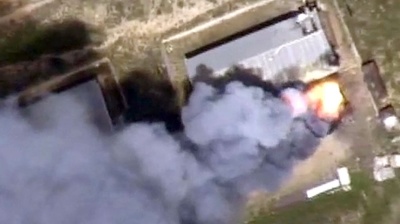 Azerbaijani police have cracked down on thousands of protesters who rallied around the country’s parliament, the Melli Majlis, in support of a full-blown war with Armenia following days of fatalities.

Some 16 people have died since a recent flare-up, which has seen the heaviest fighting between the two South Caucasus foes for years. Public opinion in Azerbaijan and to some extent Armenia, fatigued from coronavirus (COVID-19) restrictions, has pushed for a full-blown conflagration over a final solution to their border dispute.

In the largest rally Azerbaijan has seen in years, protesters gathered in Baku’s Azadliq (Freedom) Square late on July 14 demanding that the army be mobilised to retake the disputed Nagorno Karabakh enclave.

Photos by local news agencies showed hundreds of people breaking into the parliament, protesting about the government’s inaction. Other reports by security forces reported significant damage to buses and police vehicles, while several officers were injured in scuffles.

"As a result, seven police officers were injured, two service cars were overturned and rendered useless, [and] 14 more service cars and the road infrastructure of the meeting area were severely damaged," the Ministry of Internal Affairs said on July 15.

Flags and chants against Yerevan were being shouted by hundreds after the protests continued to grow. Citizens shouted: "Martyrs will not die, the motherland will not be divided."

On July 14, Azerbaijani citizens amassed on the Gazakh side of the border. A video live broadcast on Facebook shows hundreds of flag-wielding Azerbaijanis on the border of the two countries overlooking Armenian troops on the valley floor.

Azerbaijan's military said it had destroyed an Armenian fortification and artillery and had inflicted casualties on "hundreds" of Armenian troops.

Meanwhile, Armenia’s Armenpress released a video of border clashes between the two states, claiming it was Azerbaijan which was targeting the country.

Military officials briefed Prime Minister Nikol Pashinian on the situation on July 14. A statement from the prime minister's office said the situation was "under control" despite the "hostilities unleashed by the enemy in the last two days".

Fighting continued on July 15, when Armenian military officials boasted of having shot down an Azerbaijani Elbit Hermes 900 drone. However, later in the day a defence ministry spokesperson told local media that the situation at the border was “mainly calm”.