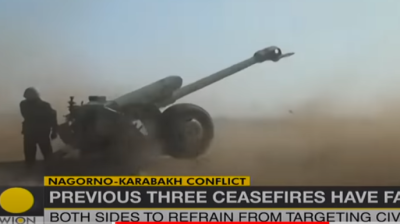 A mutual agreement not to shell civilians appears to have fallen apart.
By bne IntelIiNews November 2, 2020

Multiple reports indicate that Azerbaijani troops were by the weekend no more than five kilometres (three miles) from the Nagorno-Karabakh mountain enclave’s second-largest city Shusha (known as Shushi to Armenians).

In just over a month since fighting for the territory reignited in earnest, Azerbaijan appears to have retaken most of the land, largely lowlands, surrounding it that was lost to ethnic Armenian fighters in the 1990s.

It could now advance on Shusha within Nagorno-Karabakh, which would provide its Turkey-backed military with a staging post for an assault on the territory’s largest city, Stepanakert, or it could choose to make an attempt to close off the only main supply corridor between the enclave and Armenia, which runs via Lachin.

Reuters quoted analysts discussing a third option—consolidate military gains and return to the negotiating table from a position of greater strength, possibly the smartest move as winter draws in.

Nagorno-Karabakh is internationally recognised as part of Azerbaijan but is populated and controlled by ethnic Armenians as a self-proclaimed republic. Its leader, Arayik Harutyunyan, on October 29 called on citizens to repel any attack on Shushi, a city of cultural and strategic importance to both sides. It is set on high ground just 15 km south of Stepanakert.

“If Azerbaijan were to take it back, Stepanakert would become like another Sarajevo,” Reuters quoted Neil Melvin, director of international security studies at the RUSI think tank in London, as saying, in a reference to the city besieged during the 1990s Bosnian war.

Looking at vulnerabilities in Azerbaijan’s present military situation, analysts suggest the Azerbaijanis—who have for years been equipping their armed forces with modern military hardware drawing on oil riches, in contrast to impoverished Armenia which, by some accounts, is often left with little but Soviet-era weaponry—are potentially vulnerable to counter-attack along overstretched supply lines through territory gained in the relatively flat and sparsely populated south. Combat further north, in mountains where ethnic Armenian troops are dug in, would also be harder.

On October 31, Armenia and Azerbaijan accused each other of shelling residential areas, just a day after the sides agreed to avoid targeting civilian populations in and around Nagorno-Karabakh.

The fresh fighting came as Russia said it would provide "necessary" assistance to Yerevan if fighting between Azerbaijan and ethnic Armenian forces over Nagorno-Karabakh reached Armenia's territory. Moscow was responding to a letter from Armenian Prime Minister Nikol Pashinian to Russian President Vladimir Putin asking to begin "urgent" consultations on security assistance.

The shelling reported from both sides came hours after talks in Geneva between the two countries' foreign ministers and international mediators aimed at helping to bring a halt in fighting after the failure of three announced ceasefires.

At the talks, Yerevan and Baku agreed to engage in an exchange of bodies on the battlefield, provide lists of detained prisoners of war within a week with the aim of eventual exchange, and communicate on issues "related to possible cease-fire verification mechanisms".

Armenia’s defence ministry on November 1 said a second militant from Syria had been captured on the battlefield. Azerbaijan has previously denied the presence of foreign fighters. Turkey has denied sending mercenary militia from Syria to assist Baku, despite media investigations that appear to document it playing such a role and France’s intelligence services also claiming they have evidence of Ankara deploying such fighters. Both Iran and Russia have expressed concerns about “terrorist” and “extremist” fighters from Middle East conflict zones gaining a foothold in Nagorno-Karabakh.