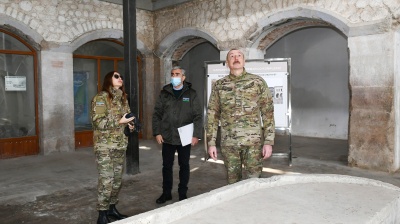 Azerbaijan's President Ilham Aliyev and First Lady Mehriban Aliyeva during a March visit to the recaptured city of Shusha in Nagorno-Karabakh.
By bne IntelIiNews April 14, 2021

Armenia on April 13 accused its historic rival Azerbaijan of fomenting ethnic hatred by displaying helmets of Armenian soldiers killed last year during the six-week war over the Nagorno-Karabakh enclave.

At the conclusion of the war, arranged under a Moscow-brokered ceasefire, Yerevan ceded swathes of territories to Baku, which was seen in Armenia as a national humiliation.

On April 12, Azerbaijani President Ilham Aliyev visited a "park of trophies" showcasing military equipment seized from Armenian troops during the war. Hundreds of helmets of Armenian soldiers who had been killed were displayed in the park along with wax mannequins of Armenian troops. Since the war ended, Azerbaijani officials have persistently shown video footage online of the precision bombing of Armenian targets that took place during the conflict, leading to accusations on social media that they were guilty of posting “war porn” and not responding to their victory in a graceful manner. Much of the bombing was conducted with armed drones supplied by close ally Turkey.

The park, due to be opened to the public shortly, has sparked uproar in Armenia. The counry’s ombudsman Arman Tatoyan was reported by AFP as saying it was "proof of genocidal policy".

"The opening of such a 'park' clearly confirms institutional hatred towards Armenians in Azerbaijan," Tatoyan was cited as saying.

"This is true fascism," 41-year-old historian Mher Barsegyan told AFP. The park "recalls evidence of Hitler's barbarism that is exhibited in museums around the world".

The defeat in the war caused a political crisis in Armenia, with Prime Minister Nikol Pashinian facing a series of protests from crowds not convinced by his assertion that signing the truce deal proved to be the best path forward because Azerbaijan had achieved a battlefield dominance that was poised to enable it to take control of the entirety of Nagorno-Karabakh. Pashinian eventually agreed to a snap poll that will be held in June.

Ethnic Armenian separatists declared independence for Nagorno-Karabakh and seized control of the region in a brutal war in the 1990s. It left tens of thousands dead and forced hundreds of thousands from their homes.

Baku and Yerevan have traded accusations of war crimes since the conflict—which had been largely dormant for decades—re-ignited last September.

Separately, Armenian police have reportedly completed their investigation into two men captured during last year’s fighting who are accused of being mercenaries from Syria. If the police findings are approved by the prosecutor’s office, the men will stand trial in Armenia and face a slate of criminal charges, including terrorism.

Turkey has been accused of recruiting hundreds of fighters in Syria who were then deployed to Nagorno-Karabakh as combatants fighting on the side of Azerbaijan. Both Azerbaijan and Turkey have denied that they deployed mercenaries during the fighting.