Attempted coup seen as under way in Kyrgyzstan 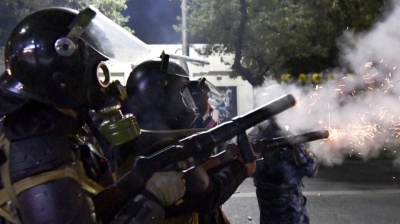 Security forces violently dispersed crowds who protested in central Bishkek prior to the later events in which government and security buildings were taken over.
By Muzaffar Ismailov October 6, 2020

Kyrgyz President Sooronbay Jeenbekov on October 6 appealed to his opponents to stop public unrest after protesters calling for the annulment of the weekend parliamentary election broke into the building housing the parliament and presidential offices in the capital, Bishkek, and freed jailed Jeenbekov’s predecessor Almazbek Atambayev, reportedly breaking him out of the national security building.

Jeenbekov described the actions of angry demonstrators who took over government, television and security buildings as an effort by some political forces to seize power illegally. In a statement on his website, the president said he had ordered security forces not to open fire and expressed his readiness to arrange the annulment of the parliamentary election results, criticised by opposition parties as distorted by vote-rigging and intimidation. As firefighters dealt with blazes apparently lit by people who broke into Government House, Jeenbekov's whereabouts were unknown, but Tolgonai Stamalieva, his spokeswoman, said earlier that he was in Bishkek, according to AKIpress. After he was freed, Atambayev was later seen greeting supporters, according to AFP. The ex-president was sentenced in June to 11 years and two months in prison for corruption after a bitter showdown last year with Jeenbekov.

One person was killed and 590 wounded in overnight clashes, the government said. The events came after Bishkek and other locations in the country saw large evening protests against the outcome of the election on October 5, with police violently dispersing crowds.

According to local media, the October 5 protests calmed down for a while, but resumed after a few hours with renewed vigour. Demonstrators returned to Bishkek city centre and broke into Government House. Footage on social media showed several floors of the building, which locals call the White House, on fire on the morning of October 6.

News site 24.kg said that the CEC would hold a meeting today to consider the demands of 12 political parties who want the results of the election held in Kyrgyzstan on October 4 cancelled.

Jeenbekov said on the evening of October 5 that he would meet on October 6 with the leaders of all political parties that participated in the election.

"I have recommended that the Central Election Commission thoroughly analyse any violations of the law, and cancel the election results if needed," Jeenbekov's website statement said.

Photos posted on social media showed protesters in the president’s offices on the seventh floor of the government building going from room to room, damaging some of the furnishings. In one of the rooms they removed a portrait of Jeenbekov from the wall and one protester kicked it out of its frame, RFE/RL reported.

Another group of protesters were reported to have seized the public television and radio company, and protesters also entered the building of the State Committee For National Security, facing no resistance.

In the election, pro-government Birimdik (Unity), a newly formed party, won 24.5% of the vote, followed by Mekenim Kyrgyzstan (My Homeland Kyrgyzstan) at 23.88% and Kyrgyzstan Party at 8.76%. The three parties are widely considered pro-government and as having an interest in keeping the status quo and supporting deeper integration with the Moscow-led Eurasian Economic Union and close security ties with Russia.

Butun (United) Kyrgyzstan, a nationalist party, was the only opposition party that reached the threshold for obtaining parliamentary representation with 7.13% of the vote. The remaining 12 parties that contested the election failed to receive the required number of votes.