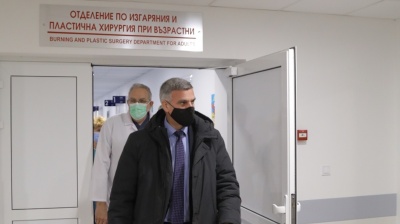 At least 46 tourists from North Macedonia including 12 children were killed when a bus caught fire on the Struma motorway in Bulgaria, two hours after midnight, on the way home from Istanbul, the Bulgarian interior ministry said.

The bus with North Macedonia’s license plates belonged to the tourist agency Besa Trans from Skopje, registered in the Bulgarian town of Kyustendil. The bus, which caught fire and overturned, was one of four Besa Trans buses that had entered Bulgaria late on Monday from Turkey. The incident happened shortly after 2am near the village of Bosnek on the Struma motorway between Pernik and Dupnitsa.

According to the Bulgarian interior ministry, fire and ambulance teams were sent to the scene and seven people from the bus were transported to the Pirogov hospital in Sofia for treatment. The seven survivors escaped after breaking the glass and getting out through a window of the bus.

Traffic on the motorway was stopped in both directions.

“A terrible tragedy happened last night in Bulgaria. Citizens from North Macedonia were killed in a bus accident, including several children and young people, and several were injured,” North Macedonia’s Prime Minister Zoran Zaev said in a Facebook post.

Zaev said he travelled to Sofia with Health Minister Filipce and Minister of Foreign Affairs Bujar Osmani, to visit the injured and find out more about the accident and the reasons for it.

“I extend my sincere condolences to the families of the deceased and wish a speedy recovery to the injured,” Zaev said.

According to Albanian Foreign Minister Olta Xhacka, all victims in the bus crash are ethnic Albanians.

“Great grief for the 45 lost lives of Albanians from North Macedonia during the tragic accident in Bulgaria. Most sincere condolences to the families of the victims and speedy recovery of the injured,” Xhacka said in a tweet.

Osmani said the passengers used the long weekend in North Macedonia, as ethnic Albanians celebrated the Day of the Albanian Alphabet, to travel to Istanbul.

Local authorities investigating the crash said the most likely cause was human error or technical malfunction. The bodies of the victims have been burnt and will be identified by DNA.

North Macedonia’s Interior Minister Oliver Spasovski said that a team from the ministry is heading to Bulgaria to support their Bulgarian colleagues in the investigation.

The mayor of Pernik, Stanislav Vladimirov, commented that the stretch was challenging and could cause accidents if a driver loses focus. He also said there were many accidents on the same stretch in both directions.

According to one of the surviving passengers, the fire started in the front part of the bus that was moving at 100 km/h. There was also a suggestion that the driver had not seen a road sign and hit the traffic barrier.

Caretaker Interior Minister Boyko Rashkov suggested that the fire could have started if the bus had touched the traffic barrier. He said that the police are yet to determine the actual number of victims, suggesting that some people from the crashed bus might have been transferred to other buses. He said that four buses were travelling together.

Bulgaria’s caretaker Prime Minister Stefan Yanev said the accident was a tragedy for his country and, even though the victims were not Bulgarians, the government is considering announcing a day of mourning to honour them.

While the most likely explanations are seen as driver error or technical malfunction, this is not the first serious accident on the Struma motorway. In 2019, 30 cars crashed, with one person dying and ten wounded. In February 2021, another crash involved two buses and 30 cars due to fog.

Although there is no evidence of possible problems with the construction of the stretch so far, some people in Bulgaria have suggested that it might have been built improperly, causing the tragedy.

Bulgaria’s caretaker Regional Development Minister Violeta Komitova has ordered an investigation into the accident to find out whether that stretch of the motorway had been built properly, and whether that could have been the cause of the accident.

Komitova said, as quoted by Focus news agency, that she cannot say at the moment whether there were earlier signs of irregularities on the stretch as her ministry is still probing a huge volume of documents from the last government of Boyko Borissov that ruled the country until mid-May 2021.

In the last few months, Komitova and her colleagues have revealed numerous cases of corrupt practices related to road constructions and repairs.

The construction of Struma was also marred by controversy due to concerns over environment safety. In January 2020, the former government decided to withdraw its application for EU co-financing for the Struma motorway stretch in Kresna gorge. That decision raised concerns over the project’s environmental effect.

The crash occurred at a complicated period for the relations between Bulgaria and North Macedonia as the progress of North Macedonia and Albania is stalled because of Bulgaria’s veto on the start of accession negotiations with North Macedonia, imposed when the previous Bulgarian government sought to wring concessions out of Skopje over bilateral language and historical issues.