Army sent into Tirana airport after strike grounds all flights 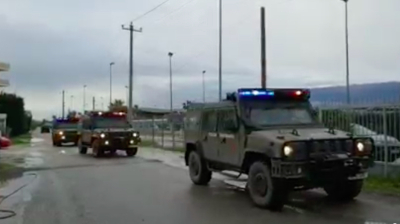 Military police were sent into Tirana airport on the evening of April 7 to remove striking air traffic controllers from the control tower.

The strike grounded flights at Albania’s only operational international airport as controllers protested against layoffs and pay cuts.

All flights due to depart after 10am on April 7 were cancelled, as are flights until 10am on April 8, as the air traffic controllers announced a 24-hour strike. 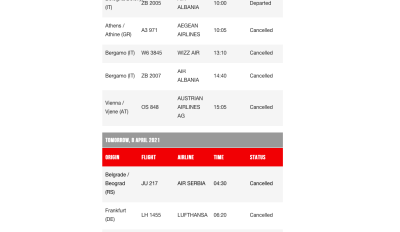 According to reports in the Albanian media, the strike was announced after five controllers were laid off. Controllers say their pay has been cut by around two thirds since the start of the coronavirus pandemic, which caused a slump in air transport to and from Albania.

Their list of requests includes the return of their colleagues to work, restoration of full salaries and financial transparency for 2021.

However, the strike has become highly politicised. At a press conference, Infrastructure and Energy Minister Belinda Balluku called the strike a “coup”.

Prime Minister Edi Rama slammed the “hardline” controllers in a tweet, writing: “Serious sabotage of the activity of Mother Teresa Airport will not be tolerated!”

He also claimed the opposition was supporting the strike in an attempt to prevent coronavirus (COVID-19) deliveries by air to Albania.

A video posted by Defence Minister Niko Peleshi on his Facebook page shows armoured military police vehicles driving through the airport to the control tower.

“Rinas Airport Mother Teresa is a strategic object of special importance for national security. Our Armed Forces structures, as an integral part of the airport, have increased vigilance to ensure the maintenance of the airport security perimeter especially after the boycott of work by the controllers of the civil aviation company Albcontrol,” wrote Peleshi.

The Air Traffic Controllers European Union Coordination (ATCEUC) commented on the situation in both Albania and Poland, where three air traffic controllers were dismissed recently. It appealed to Albcontrol and Poland’s PANSA to urgently reinstate the fired employees.

“[I]n Albania, five ATCOs [air traffic controllers] have been fired because, due to the heavy stress they have been living with over the last year, exacerbated by unilateral cuts in salaries of up to 70%, their dismissal occurred after they declared temporary inability due to these stresses in accordance with the Albanian ATCOs' competence scheme,” said the ATCEUC press release.

“It would be wise not to underestimate the solidarity amongst European Air Traffic Controllers when witnessing such clear manifestation of abuse of power that our colleagues from Poland and Albania are facing!” the organisation added.