Armenians remain optimistic about the future and pleased with their government, poll shows 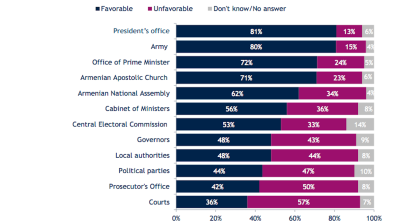 Respondents to IRI's poll give their views on Armenian institutions.
By Ben Aris in Berlin July 10, 2019

The people of Armenia are still giving the new government of Prime Minister Nikol Pashinian a lot of credit following their ousting of the former corrupt government.

Pashinian was swept into power last year and his Civil Contract Party won 70% of the vote in snap elections in December. Two moderate opposition parties—Prosperous Armenia led by tycoon and arm-wrestling champion Gagik Tsarukyan, which was part of the previous ruling coalition, and Bright Armenia, a liberal, pro-Western party—also received enough votes to clear the 5% threshold to enter parliament. The Republican Party (HHK), which dominated Armenian politics for two decades before the government was ousted, has no seats at all in the current parliament.

Getting into power was always going to be the easy part. The hard part is making a difference, as bne IntelliNews argued in a blog at the time.

So far so good. Three quarters (72%) of respondents to a new poll by the International Republican Institute (IRI) approve of the government’s work and 60% think the country is going in the “right direction”. Approval of the president’s office remains a sky high 80% and the work of the parliament has also been met with widespread approval. 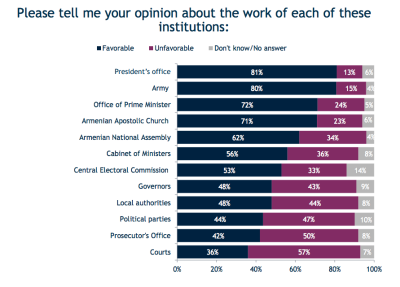 Poll results indicate a strong popular mandate for the new government to press on with reforms. More than 60% of respondents want the government to undertake both political and economic reforms quickly rather than gradually.

“The goodwill expressed by the Armenian people presents the Armenian government with an unprecedented opportunity to undertake fundamental reforms that strengthen the country’s democracy and improve the economic well-being of its people,” said Stephen Nix, IRI regional director for Eurasia. “The government’s speedy delivery on reforms will be key to maintaining its strong public support and the momentum to press on with its agenda.”

Coloured revolutions are inspiring as the people of a country rise up to throw out their autocratic and corrupt governments. However, the track record for countries that have been through a popular uprising is poor. As bne IntelliNews commented in “Where did all the coloured revolutions go?” in almost all of the coloured revolutions in the former socialist block over the last two decades, with the possible exception of Georgia, the economic and political upheavals have generally left the people worse off. Ukraine is the most striking example as it has had two revolutions, the Orange Revolution in 2006 and the Revolution of Dignity in 2014, but today it remains as riven by corruption as ever and is the poorest country in Europe.

At the end of his term in office former Ukrainian president Petro Poroshenko was in charge of a government that was trusted by only 9% of the population and between 70%-80% of the population thought the country was going in the “wrong direction”. Overthrowing a corrupt regime is in itself not enough to ensure prosperity.

Unseemly as the rule of authoritarian leaders is, as Eurasia Group founder Ian Bremmer argued in his book “The J Curve”, the stability of authoritarian systems allows the population to build up their lives. However, in the long run these systems are limited by their inefficiencies and corruption and cannot produce the kind of wealth and equality a system based on democratic principles can. Russia is the obvious example, where income levels are twice those in Ukraine and the population enjoy the highest standard of living in the Commonwealth of Independent States (CIS), despite the recent stagnation of real incomes.

Pashinian is attempting to short cut the process and install a democratic and accountable government after having smashed the old system.

It's not easy. While 60% of respondents think Armenia is on the right path, that result is down from 72% from the last poll in October last year. The respondents' greatest complaint was bad management (22%) and those that felt they can influence the course of government has fallen from 72% to 53% over the same period.

In keeping with previous IRI surveys, jobs (30%), socioeconomic problems (18%), wages (14%) and pensions (12%) topped the list of priority issues the government must address within the next six months. While two fifths (42%) think that the economy as a whole has improved over the last six months, only a quarter (24%) cite improvements in the economic situation of their own households over the same time period.

At the national level household finances and jobs remains the biggest concerns, but somewhat oddly at the level of the small towns and villages it is “garbage collection” that is the number one concern, just ahead of jobs. 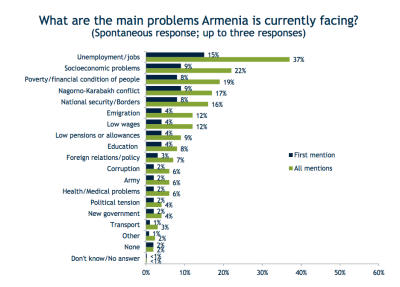 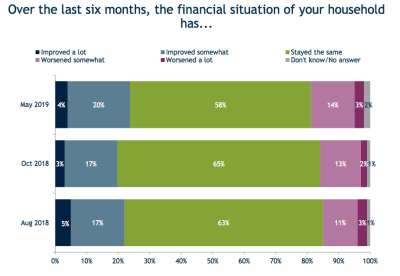 Looking forward at the issues facing the country’s future, “war” is the biggest concern. Armenia is locked in a bitter rivalry with its neighbour Azerbaijan over the Nagorno Karabakh enclave and fighting between the two countries flared up again last year. 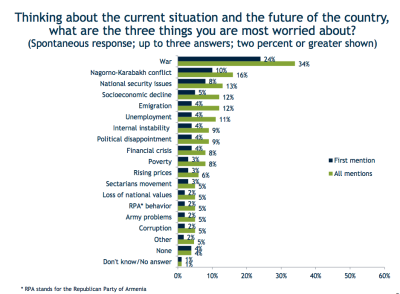 Overall the poll paints a picture of continued optimism in the government and the prospects for real change, but that the same time the shine is beginning to wear off as Armenia remains a country beset by deep economic problems and relative poverty. 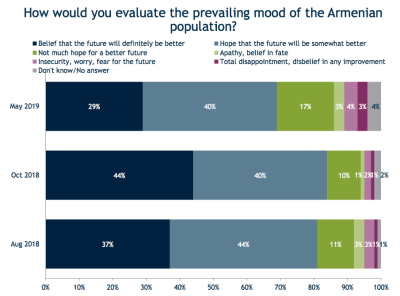 Who's who in the new Russian government

On January 21 Russian President Vladimir Putin approved the personnel of the new government of Mikhail Mishustin. There are many new figures, including six new deputy prime ministers and eight ministers that did not work in Dmitry Medvedev’s governme