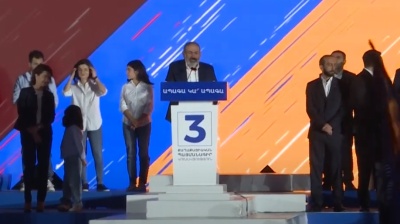 Estimates placed the attendance at around 20,000 supporters.

On June 20, the small, impoverished South Caucasus country holds snap parliamentary polls called by Pashinian in an attempt to diffuse a political crisis that broke out after last autumn’s disastrous Nagorno-Karabakh war with Azerbaijan.

The moment of truth has arrived," declared Pashinian, who turned up at the rally in the capital's Republic Square with his wife and children.

"On June 20 we will come to the polls to stage a steel revolution," he added as the crowd cheered and chanted "Nikol!"

During an aggressive campaign that sparked warnings from the country's rights ombudsman, Pashinian has urged voters to give him a "steel mandate" and brandished a hammer.

Many at June 17's rally said Pashinian should not be blamed for the mistakes of his predecessors and defended his track record.

"We do no not want the old regime to return," one supporter, Mikael Kirakosyan, told AFP.

The 60-year-old engineer-turned-businessman said that "anarchy and corruption" had reigned in the ex-Soviet country of nearly 3mn people before Pashinian came to power after a bloodless uprising in 2018.