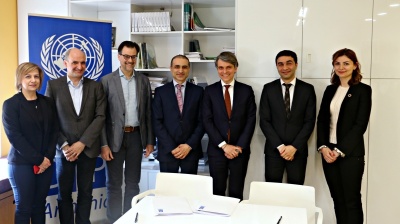 Armenia-based tech venture capital firm Granatus Ventures is to launch a new fund with support from the UNDP, the two organisations said on April 1.

Granatus Tech4SDG will have a target size of $40mn and will invest in technology-driven ventures that demonstrate strong potential for social and environmental impact. The geographic scope of the fund will not be limited to Armenia; a press release said investments would be “global”.

“This initiative addresses the investment gap necessary to achieve the UN Sustainable Development Goals (SDGs) by 2030,” the statement said.

The UNDP’s role will be that of “sustainability partner” for the fund, sharing best practices in impact management and the application of internationally accepted Environmental, Social and Governance (ESG) standards across the investment process. The UNDP will also provide financial support to structure the fund, and help in the fundraising process and in sourcing relevant deal flows across key markets.

“The Granatus Tech4SDG Fund aims to leverage rapidly developing technologies and engineering talent to maximise the social and environmental impact and mitigate ESG risks of its investments,” said a statement on the release.

Granatus Ventures became the first technology venture capital firm in Armenia when it launched in 2013. It currently manages a portfolio of 14 high-tech startups that have together attracted over $62mn from venture capital firms in Silicon Valley and Europe.

Recent investments include Grovf, which develops technologies for databases, 2HZ which works with disruptive AI-powered voice processing technologies, and XCloud Networks, a specialist in intent-based networking.

While Armenia’s high tech sector is relatively small, it is growing faster than the economy as a whole, and the government has been seeking to develop potential in this sector. Prime Minister Nikol Pashinian talked in October of a "new technological revolution” in the country, restoring the important technological and scientific role it held in the Soviet era. One of Yerevan’s plans is to set up a ministry of high technologies, according to the prime minister.