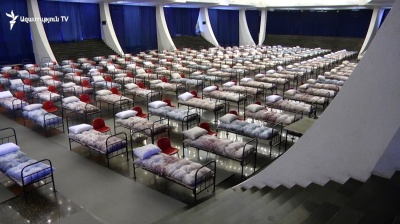 Images of a cavernous, Soviet-era sports hall in Yerevan that's been prepared as an emergency field hospital for 'spillover' coronavirus cases has shocked Armenians.
By bne IntelIiNews May 25, 2020

Armenia appears to be in danger of running out of intensive care beds for coronavirus (COVID-19) patients. Only 26 such beds of the 186 in the country are free, Armenian health minister Arsen Torosyan was reported as saying by Public Radio of Armenia on May 24.

Armenia ended its virus lockdown around three weeks ago, but it has since experienced a renewed surge in infections, with May 25 bringing the highest single-day growth in the number of cases, at 452, yet experienced. The country is impoverished and government officials have frankly stated that prolonging the lockdown without causing irreparable damage to the economy was not something they saw as achievable.

Eurasianet reported on May 19 how an image of a cavernous, Soviet-era sports hall in the shadow of the Armenian genocide memorial in Yerevan had shocked Armenians. The hall was filled with row after row of empty beds, set aside in case the coronavirus outbreak overwhelmed the country’s hospitals.

Torosyan has previously emphasised that Armenia was one of the few countries that had been able to hospitalise all patients with confirmed cases of COVID-19. But the strategy is changing. On May 19, the Ministry of Health announced that due to the growth in new cases the country was adopting a patient reclassification strategy which would entail sending patients who are asymptomatic as well as those with mild symptoms back home.

OC Media reported on May 24 that the Armenian State Commission on the State of Emergency had announced that starting from May 25 people must wear masks in all outdoor and indoor spaces or face fines of Armenian dram 10,000 ($21).

The country, it added, would be divided by officials into 119 regions, each with its own monitoring groups consisting of police officers and personnel from the Ministry of Emergency Situations. These groups would ensure that residents, businesses, and other organisations were following all necessary social distancing and hygiene measures.

Armenia, with a population of slightly less than three million people, borders both Iran and Turkey, which are both home to around 83mn people and which have both suffered extremely severe coronavirus outbreaks (although traffic between Armenia and Turkey is extremely limited as the countries do not have diplomatic relations). Armenia, meanwhile, has very strong economic and migrant worker connections with strategic partner Russia, another country suffering a huge COVID-19 dilemma. Like Armenia, Iran appears to be suffering a second surge of virus infections as it moves out of lockdown.

As of last week, Armenia’s health ministry had recorded the country’s infection rate, or ‘R’ number, at 1.4, meaning each person infected with COVID-19 was on average spreading their infection to 1.4 people. Such a rate, means the virus spread can become exponential.

In an interview with Civilnet, minister Torosyan said that Armenia has more than enough virus test kits (over 50,000), and had been carrying out 10 tests for each one confirmed case.