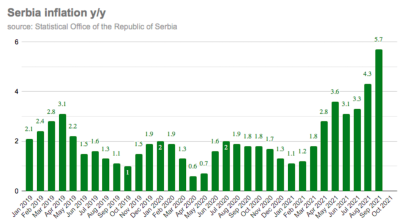 Annual inflation rose to 5.7% in Serbia in September, the National Bank of Serbia (NBS) said in a statement, quoting Statistical Office data.

The figure represents an acceleration from the 4.3% year-on-year inflation recorded in August, after inflation has been on an upward trend this year. Month-on-month inflation stood at 0.8%.

Almost 60% of the y/y inflation was determined by factors that monetary policy cannot influence — the prices of unprocessed food and energy, which together make up a fourth of the consumer basket, the NBS said.  This is in line with the broader international trend of rising food and energy prices.

These two groups of products together contributed 3.3 percentage points (pp0 to y/y inflation. In September unprocessed food prices went up 17.9% y/y, reflecting mainly a hike in fresh vegetable and fresh meat prices by 36.2% and 15.1%, respectively.

Such movements were affected by the vigorous rise in global food prices and the effects of the low last year’s base — the prices of both groups of products were exceptionally low during the past year. A 6.2% increase in fresh fruit prices also lent an impetus, though smaller, to the September y/y growth in unprocessed food prices, the NBS said.

In the same period, energy prices picked up 9.5%, primarily on account of soaring global oil prices that reached their pre-crisis level, which pushed up petroleum product prices in the domestic market by 16.3% y/y in September.

The rise in y/y inflation compared to 4.3% in August was still predominantly led by the rising prices of unprocessed food, chiefly vegetable prices, which displayed seasonally unusual movements throughout the third quarter, partly because of the unfavourable weather conditions and the drought during the summer months.

The rise in inflation in September was also prompted, to a lesser extent, by the prices of meat, fruits and some services. Y/y core inflation (CPI excluding food, energy, alcohol and cigarettes), which is not affected by monetary policy measures, was again significantly lower than headline inflation in September, measuring 2.6%, and suggesting that inflationary pressures are temporary.

The relative stability of the exchange rate, in place for a number of years and to be preserved in the coming period as well, is a strong anchor of price stability, the NBS said.

Since the start of the year, y/y core inflation has moved at around 2%, mainly due to the safeguarded stability of the exchange rate. The temporary character of inflationary pressures is also indicated by one, two and three-year ahead inflation expectations of the financial sector, which still hover at around 3%, as well as corporate inflation expectations still moving within the range from 2% to 3%.

According to the NBS projection, over the coming two quarters, y/y inflation will most likely move above the upper bound of the target tolerance band of 3.0±1.5%. As of the second quarter of 2022, the central bank expects y/y inflation to return within the target band, and as of the second half of 2022 to move around the midpoint, which will be facilitated by the preservation of the stability of the exchange rate in the coming period.

The NBS said it will continue to help safeguard business, investment and consumer confidence which was key to the preservation of production capacities during the pandemic and will be critical for economic growth going forward as well.

In view of the high base this year, there is a possibility that in the second half of 2022 headline inflation will move within the lower bound of the target tolerance band of 3.0±1.5%. Risks to inflation going forward are mainly related to the movement in the prices of unprocessed food and global energy prices, the NBS concluded.

The 21-share blue-chip CROBEX index has been rising since the start of the year as Croatia's economy continues its recovery from the coronacrisis.

New records announced daily in several countries, but most governments are reluctant to introduce new restrictions.

The Russian initial public offering (IPO) market in 2021 hit a record $3.7bn, the highest since 2011, RBC business portal reported citing the data by Refinitiv. At the same time, the M&A market was down by 40% in 2021.