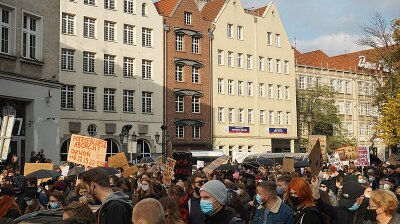 Portesters in the northern city of Gdansk. Demonstrations took place across the country.,
By Wojciech Kosc in Warsaw October 26, 2020

Hundreds of thousands of angry people took to the streets in Poland for a weekend of protests against the recent ruling by the country’s top court banning abortion in case of fetus abnormality.

Rage proved stronger than fears of the coronavirus (COVID-19) pandemic, which is currently rampant in Poland, with the number of officially registered new cases hitting a new high of 13,632 last Friday.

The protests erupted nearly immediately after the Constitutional Tribunal effectively said on Thursday that women need to carry all pregnancies to term that are not the result of rape or incest, or if they threaten the woman’s life.

Out of some 1,100 abortions performed legally in Poland last year, nearly all were because the fetus was ill or otherwise abnormal to the point excluding long survival after birth or requiring exhausting and expensive life-long care.

Those pregnancies will now be illegal to terminate once the tribunal’s ruling is published, which is expected this week.

Given the scale and anger of the protests, however, Poland’s government – which stacked the Government Tribunal with loyal judges, effectively making the formally independent body a government tool – could influence a suspension of the publication.

The protests were large and widespread across Poland, even in cities and towns that traditionally gave the incumbent right-wing government support. In the northeastern town of Bialystok, an estimated 11,000 people gathered in front of offices of MPs for the ruling Law and Justice (PiS) party, chanting “Fuck PiS”.

A series of thousands-strong rallies has been taking place each evening since Thursday in front of the Warsaw house of PiS leader and deputy Prime Minister Jaroslaw Kaczynski.

People also targeted Catholic churches and the clergy. Poland’s Catholic hierarchy has long lobbied for the tightening the country’s abortion laws and the Episcopate welcomed the tribunal ruling.

In response, the protesters sprayed “Abortion is OK!” graffiti on churches across Poland. In several locations, the protesters also entered Sunday masses with placards and leaflets. In the town of Szczecinek, a group of young women More protests are planned this week, according to All-Poland Women’s Strike (OSK), one of the biggest and most active groups behind the unrest.