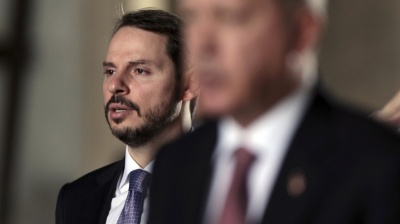 Did Albayrak put his foot in it?
By bne IntelliNews January 24, 2020

Analysts think Turkish finance minister Berat Albayrak got “a slap on the wrist” for remarks he made about Turkey needing a “more competitive” lira. The comments fuelled speculation that he was calling for a weaker currency.

“Seems like he got a slap on the wrist for comments last week about wanting a competitive exchange rate,” said BlueBay Asset Management Timothy Ash in a January 24 note to investors after Albayrak followed up his remarks by telling Japanese financial daily Nikkei in an interview that the Turkish lira (TRY) is actually competitive at current levels.

“Broke the number one rule for members of the government—Don't talk about the exchange rate!” added Ash.

Albayrak added in the interview that the TRY “looks competitive” at around 5.70-5.90 against the dollar. “When we look at the developments in imports and exports as well as balancing in the current account, the foreign exchange rate looks competitive,” Albayrak said in response to a question from the newspaper on whether he was satisfied with the lira’s recent trading range.

The TRY was trading at 5.9385 per dollar as of around 18:00 Istanbul time, compared with a close of 5.8862 a week ago. During the 2018 Turkish currency crisis it sank to an all-time low, trading in the 7.20s. Across 2018 and 2019 combined, the lira lost 36% of its value against the dollar. The loss last year was 11.1%, less than headline inflation so amounting to a real appreciation of the currency and a headwind for exporters, Bloomberg noted.

Turkey’s balance of payments (BoP) swung to a deficit in November, with a more stable lira, aggressive monetary easing and credit-stimulus policies from the Erdogan administration opening the way to a pick-up in consumer demand and more import flows.

Responding to a question from Nikkei on whether dollar sales by state banks was a way of stabilising the lira, Albayrak said: “Within free-market rules, state banks pursue both the public interest as well as profitability, and this will continue as such.”

Albayrak, who also said that financial stability was “a matter of national security”, added that the switch to an executive presidential system in 2018 had made the banks more active market players, saying: “All state banks, private banks, the central bank and other institutions started to become much more active market players in this new structure as strong stakeholders and acting in a more harmonious and coordinated fashion for financial stability,”

Turkish state banks have been selling dollars to prop up the lira since last year, especially in times of pronounced volatility partly driven by geopolitical anxieties such as in relation to the October invasion of northeast Syria to drive Syrian Kurd militia from border areas.

Many economists are convinced that the Turkish central bank by now has monetary independence in name only and that it is Albayrak’s father-in-law, President Recep Tayyip Erdogan, who is at the helm when it comes to setting interest rates. But Albayrak said: “I do not deem any of the criticism coming on that matter as noteworthy.”

The central bank said on January 24 that policymakers must keep a lid on financial volatility and deliver predictable fiscal policies to ensure the economic recovery remains on track, following last year’s recession in Turkey. The regulator added that its own policy would depend on further disinflation.

The central bank has cut its benchmark interest rate to 11.25% from 24% since July. It is now in negative territory in real terms as annual inflation was 11.8% in December.