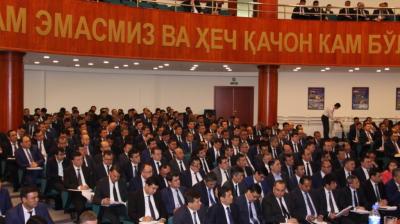 Uzbek central and commercial bankers meet regularly to discuss the big changes under way in the country's banking and financial markets.
By Kanat Shaku in Almaty & Iulian Ernst in Bucharest January 24, 2020

Georgia’s LSE-listed TBC Bank Group has announced that it has obtained a preliminary Uzbekistan banking licence and hopes to launch banking operations in the Central Asian country in the near future.

A finalised licence for the “highly attractive” Uzbek market should be forthcoming in the summer under current plans, TBC said, adding in a statement: "Obtaining a banking licence is a two-step process, wherein the banks are first granted a preliminary licence after which they are expected to meet certain predefined requirements to receive the final licence."

In December, TBC launched trial operations in point-of-sale consumer financing in Uzbekistan. The financing of consumer products, primarily in the electronics and furniture markets, is the main objective. In parallel, the bank is actively developing its payments business in the country through recently acquired subsidiary Payme, the leading payment platform company in Uzbekistan. It already serves around 1.8mn customers.

As previously announced, TBC’s strategy is to develop a greenfield, next-generation banking ecosystem for retail and micro, small and medium sized enterprise (MSME) customers in Uzbekistan. The main focus will be on digital channels, including with newly developed product Space.

With a population of 33mn growing at around 2% a year, Uzbekistan is the most populous and, in terms of GDP, the fastest expanding country in Central Asia. It has a low but rising penetration of banking products. Its retail loans to gross domestic product ratio was only 6.0% at the end of 2018.

Tashkent is on the right track in terms of reform and introducing innovations, Giorgi Shagidze, deputy general manager of TBC Bank said in an interview with BMG.

For the Uzbek venture, TBC said that it was planning to join forces with international financial institutions and a local partner, while retaining a minimum 51% stake.

TBC said that it has already secured interest from the European Bank for Reconstruction and Development (EBRD) and the World Bank’s International Financial Corporation (IFC), while it has reached an agreement on main terms with the Uzbek-Oman Investment Company to act as a local partner. The total initial investment from the shareholders will amount to $40mn. 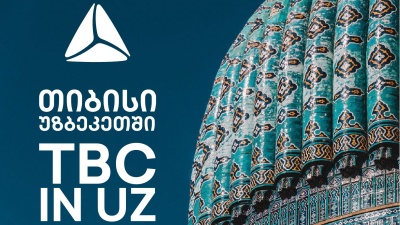 TBC will enter a banking system still 86%-owned by the state (Credit: @JSCTBC).

“This is a very significant milestone and brings us closer to the launch of our banking operations in the Uzbek market,” Vakhtang Butskhrikidze, chief executive officer of TBC Bank, commented. “We are very excited about this journey, which is a critical part of our international expansion strategy. I want to take the opportunity to thank the Uzbek authorities for their trust and express deep gratitude to our team working on the Uzbek project for their outstanding effort and diligence.”

The vast majority of Uzbekistan’s banking system (86%) still belongs to the state. The country’s large state-owned banks generally tend to provide loans and other services exclusively to specific state-owned enterprises to which they are intrinsically tied to. At the same time, corporate deposits, mainly from state-owned and government-tied enterprises, account for the lion’s share of deposits.

After moderate growth of 17.5% in 2018, corporate deposits climbed by 30.5% over the first nine months of 2019—however, corporates' share in liabilities shrank to 35.6%. The bulk of the deposits were from corporates, whereas the share of households' funds remained insignificant at 21% as of the end of the third quarter of 2019.

Under these state-dominated circumstances it remains difficult for foreign banks to enter the Uzbek market, meaning TBC’s securing of a preliminary banking licence is exceptional.

“From time to time, some credit institutions from the republics of the former USSR and foreign countries make attempts to enter the banking market of Uzbekistan. Among them are Georgian TBC Bank, as well as Western Sturgeon Capital, which acquired a 39.6% stake in Universal Sug'urta (an insurance company that owns 9.6% of Universal Bank), and a major Swiss investor Respons Ability, which bought IFC’s 50% stake in Hamkorbank (which owned 15.4% of the bank’s share capital) in November 2018,” Alexei Korenev, an analyst at Finam Group, told Kazakh news website, InBusiness.kz, in April last year.

Another notable foreign bank, not mentioned by Korenev, is Tenge Bank, a subsidiary of neighbouring Kazakhstan’s Halyk Bank, which received its banking licence in Uzbekistan in 2019. The Uzbek banking sector also hosts two foreign banks operating for trading and direct investment purposes: one from Turkey and another from Korea.

That said, Korenev considered it unlikely that large foreign banks, including Russia’s Sberbank and VTB, would be able to enter the Uzbek market because the authorities likely fear the influence that such powerful foreign lenders would have over the financial system. There are no Russian or Chinese banks at all in the Uzbek banking sector.

“The prospects for the development of the financial sector of Uzbekistan are rather vague for the coming years. A variety of scenarios are possible here, but the likelihood that it will quickly become open, diversified, oriented to the mass retail consumer and accessible to foreign investors is relatively small,” Korenev noted.

Nevertheless, ending the shortage of foreign involvement in the Uzbek banking sector could be a realistic prospect as Uzbekistan in September partially lifted restrictions and introduced the opportunity for foreigners to own up to 5% of a bank’s shares without the need to apply for permission. There also appears to be no limit on the number of such 5% stakes that can be sold, provided the involved investors are unrelated. Local funds and brokers are anticipating a big inflow of investment as currently some 85% of the turnover on the Tashkent Securities Exchange is made up of bank shares.

Under a bureaucratic rule created in the mid-2000s by the regime that held sway under the late Islam Karimov, foreign investors were banned from purchasing equity in Uzbek banks unless a prior central bank approval was obtained. Used as a ploy to prevent mainly Russian interests from controlling the nascent banking sector (the combined equity of all Uzbek banks stands today at roughly $30bn relative to a GDP of $49bn), the policy caused a significant shortage of capital in the local banking industry, serving to hurt domestic banks.

The reformist administration developed by President Shavkat Mirziyoyev since late 2016 has by scrapping the ban last September at least put an end to the Karimov shutout. But it remains to be seen just how open Uzbekistan is willing to be.