Albanians and Montenegrins the least likely to shop online in Europe 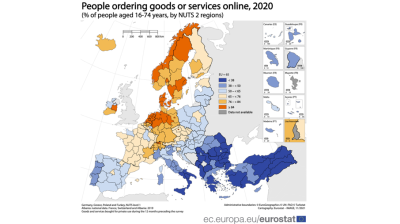 Residents of Albania and Montenegro are the least likely to shop online across Europe, shows a compilation of data from the EU’s statistics office Eurostat.

While internet use and e-commerce are increasing in the Western Balkans, and several national and regional marketplaces have emerged, residents of the region are still less likely than their counterparts in the EU to make online purchases.

The data from 2020 doesn’t include Albania but shows just 23% of people from Montenegro placed orders online, and 28% of those from Bosnia & Herzegovina.

Residents of fellow Western Balkan states Serbia and North Macedonia were more likely to make online purchases, at 38% and 34% respectively. However, 46% of Kosovans made online purchases, more than in most of the southern EU member states.

Looking at the data for 2019, the latest available for Albania, just 7% of Albanians shopped online, and 16% of people from next-ranked country Montenegro.

Among the EU member states, the least likely to shop online were residents of its two poorest countries, Bulgaria (31%) and Romania (34%).

At the other extreme, the most likely to make online purchases were residents of former EU member the UK (90%), followed by the four Nordic states, where the share of online shoppers ranged from 84% to 89%.

Of the newer EU members, residents of Czechia (72%) and Estonia (68%) were most likely to make online purchases.