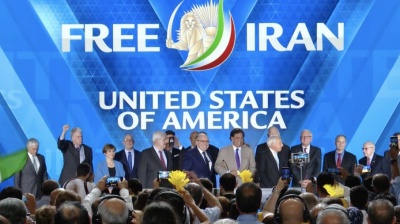 Iranians are generally incredulous that US Republican politicians (Rudy Giuliani and Newt Gingrich are among those seen at this 2018 event) have chosen to back MeK. It has little real support in Iran and is typically regarded as a Marxist-Islamic cult.
By bne IntelliNews October 23, 2019

“The Albanian authorities have identified these individuals and thanks to intelligence from informants inside the criminal organisations prevented a plan [of attack] of March 2018 and the eventual planning of attacks by organised crime members ... on behalf of Iran,” Veliu said.

Since 2014, some 3,000 members of MeK, also known as the People’s Mujahideen Organization of Iran (PMOI), have settled in exile in Albania. They arrived in the country saying they had suffered attacks in Iraq. They now live in a compound near Durres, Albania’s main port.

In October last year, the French pointed the finger at the Iranian intelligence ministry after claiming they had prevented the bombing of a rally of Iranian opposition groups including MeK near Paris. The ministry refuted the allegations. The rally was reportedly set to feature senior US figures and politicians among its guests, including US President Donald Trump’s attorney Rudolph Giuliani.

MeK has also enjoyed the longstanding support of American foreign policy arch-hawk John Bolton, who until lately was Trump’s national security adviser. "Before 2019 we here will celebrate in Tehran," Bolton told a MeK meeting in Paris in July 2017 as he pushed for regime change in Iran.

The sight of Giuliani, Bolton and other Trump and US Republican officials allying themselves with MeK is astonishing to many Iranians. Once considered a terrorist movement by the EU and US, and still listed as a terrorist organisation by Tehran, MeK is seen by many Iran observers as a fringe, Marxist-Islamic cult-like group which lost out when the spoils were shared after the 1979 Islamic Revolution. It went on to take Iraq’s side in the 1980-88 Iran-Iraq war and has no apparent support of any significance inside Iran.

Critics say MeK is built around the personality of its leader, Paris-based Maryam Rajavi, who wants to see an end to Shi’ite Muslim clerical rule in Iran. Rajavi told Reuters in July that she stood for democracy, separation of state and religion, private investments and a non-nuclear Iran.

Following the announcement from the Albanian police that they had foiled attacks on Mek, Ali Safavi, an official with the foreign affairs committee of the Paris-based National Council of Resistance of Iran (NCRI), said in a statement: “It is time that the Iranian regime’s embassies in Europe, including the one in Albania, be shut down. They are not diplomatic centres … [they] facilitate the regime’s terrorist operations abroad.”

The NCRI is an umbrella bloc of opposition groups in exile that includes MeK.

A spokesman for the Albanian police told Reuters police were making public the attempted plot since it had taken a year to assemble evidence and they would try to arrest the main suspects, said to be in Austria and Turkey. Two were held in March 2018 but set free for lack of evidence.

An Albanian opposition leader denounced the announcement of the foiled attacks as a ploy by Socialist Prime Minister Edi Rama to divert attention from Tirana’s failure to start entry talks with the European Union.