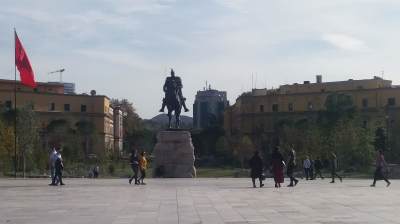 By Valentina Dimitrievska in Skopje June 24, 2019

Albania’s Electoral College, the country’s highest election body, has backed the holding of local elections as planned on June 30.

Albanian President Ilir Meta signed a decree earlier this month to cancel the municipal vote, citing fears of incidents as the opposition protests that have been held since February escalated further. However, Prime Minister Eli Rama’s government has insisted the vote will go ahead.

The ruling issued by the five-judge Electoral College on June 24 actually concerned a request made by a small party to deregister for the election after Meta’s decision.

It decided unanimously that the small far-right National Unity Party must participate in the election and that it could not be deregistered.

The head of the Socialist Party's Parliamentary Group Taulant Balla said following the decision that it is now clear that the elections are to be held on June 30 and urged all parties to respect this, Albania Daily News reported.

Had the Electoral College accepted the request for deregistration, that would have meant it had recognised the president's decree canceling the vote.

Albania’s biggest opposition party, the Democratic Party, rejected the decision of the Electoral College saying that the decree signed by the president can be judged only by the Constitutional Court, which is currently non-functional as Albania is in the midst of an overhaul of the judicial system. The election will be boycotted by the opposition.

The Democrats say they will continue to hold protests and will do whatever is needed to prevent the elections.

The latest protest was held on June 21, when opposition supporters demanded Rama’s resignation. Some carried banners saying “No election without the opposition”.

Rama has said repeatedly that the local election will be held as scheduled and that the president’s decree canceling the vote is unconstitutional.

The governing Socialist Party has launched a procedure to dismiss the president.