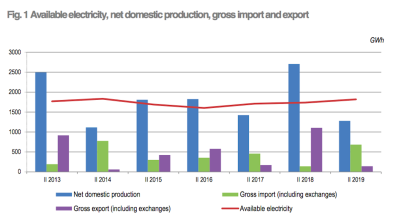 Albanian net power generation plunged by 53% year on year to 1,279 GWh in the second quarter of 2019, the country’s statistics agency INSTAT said on August 26.

Unfavourable weather conditions this year limited the overall production of hydropower plants (HPPs) in the Drin cascade operated by state-run power producer KESH, as Albania relies mostly on hydropower for its power production.

Independent power producers (IPPs) generated 789.7 GWh of electricity in the period under review, down 13.4% from a year ago.

Electricity losses totalled 359.1 GWh in the period under review, down by 7.9% y/y. Losses in the distribution network accounted for the bulk of this figure, 315.7 GWh.