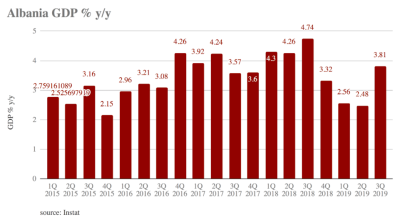 Albania’s GDP increased by 3.81% year-on-year in the third quarter of 2019, with the mining sector leading the growth
By bne IntelliNews January 7, 2020

By sector, compared to the same quarter of 2018, the mining and quarrying showed the largest increase, of 16.56%.

The other sectors to show a rapid year-on-year expansion were: financial and insurance activity, which increased by 12.07% y/y; professional administrative services (9.49%); trade, transport, accommodation and food services (6.69%); public administration, education and health (6.44%); industry, electricity and water appeared to increase by 5.85%; and, real estate (5.18%).

The steepest decline was in the arts, entertainment and recreation services, other services sector, which contracted by 24.02%. Construction activity decreased by 1.14% y/y which, Instat said, was mainly influenced by companies related to the Trans-Adriatic Pipeline (TAP) project.

In monthly terms, the fastest growth was achieved in the professional and administrative services sector (7.39%), followed by financial and insurance (4.32%), and public administration, education and health (3.49%).

Month-on-month, arts, entertainment and recreation services, other services contracted by 9.20%, and there was also a substantial 5.40% decline in industry, electricity and water.