A bumpy road towards relevance for Kazakhstan's AIFC stock market 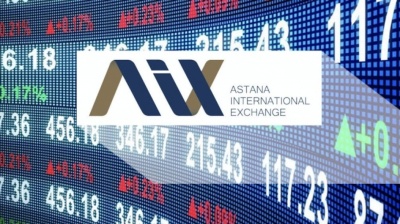 Three years have passed since the launch of Kazakhstan’s Astana International Finance Centre and it has had a bumpy ride as it tries to get established and the premier bourse in Central Asia.
By Kanat Shaku in Almaty July 5, 2021

Three years have passed since the launch of Kazakhstan’s Astana International Finance Centre (AIFC). To great fanfare, it arrived complete with a new bourse, the Astana International Exchange (AIX), partly owned by the Shanghai Stock Exchange (SSE) and Nasdaq, which provide’s the exchange’s trading platform. However, at the time of its unveiling, the AIFC was looked on with much scepticism given how Kazakhstan had previously failed to launch a financial centre in its commercial capital, Almaty. So what have the Nur-Sultan-based AIFC and AIX achieved since then?

At face value, there appear to be plenty of promising developments related to the financial centre—mainly with respect to the AIX. This year, for example, Kazakhstan’s Damu Entrepreneurship Development Fund received the Green Market Pioneer award in April for the issuance of the first ever green bonds on the Astana International Exchange (AIX) with the support of the United Nations Development Programme (UNDP) last August. The AIX has also announced plans this year to join the Global Green Finance Index global network.

Last year, the bourse was undoubtedly and substantially boosted by the double-listing of Kazakh fintech firm Kaspi.kz’s initial public offering (IPO) on the London Stock Exchange (LSE) and the AIX. The IPO made international headlines as a surprisingly big success. It valued Kaspi (KSPI) at $6.5bn, the highest price tag ever given to a publicly listed Kazakh company. The flotation was the LSE’s second largest of 2020 at the time of listing and the fourth largest in all of Europe.

Other milestones of the AIX—part of a special jurisdiction regime that is governed in accordance with English Common Law—include the debut green bonds, the listing of the AIX's first Chinese yuan-denominated (RMB-denominated) bond and the listing of London-listed Ferro-Alloy Resources.

The bourse also listed shares of Bank Center Credit (BCC), which became the first issuer listed on AIX based on the Regional Equity Market Segment (REMS), introduced in 2020. It aims to grant mid-cap companies access to a broader investor base and the equity capital market. In November, the AIX, in partnership with Kazakh investment firm BCC Invest, announced the listing of new exchange-traded notes. These are BCC Global Exchange Traded Notes (ETNs) linked to the performance of one of Kazakhstan’s largest interval mutual funds, “CenterCredit-Valyutniy”.

However, the AIX appears to be far from acquiring the liquidity needed to become a market that justifies its existence within the Kazakh economy.

Much of the AIX’s potential for expansion into a functional securities exchange market—as compared to the Kazakhstan Securities Exchange (KASE) in Almaty, which was Kazakhstan’s first failed attempt at kicking off a bourse—relies on the Kazakh government’s willingness to continue IPOs of stakes in major state-owned firms. The big privatisation programme has continued to suffer postponements introduced by authorities due to a lack of favourable market conditions in the past few years. Given the situation with the coronavirus pandemic and associated uncertainties, it is likely that the authorities may postpone the planned listings once again this year.

Since 2018, Nur-Sultan’s privatisation programme has only managed to list a 25% stake in the world’s biggest uranium miner Kazatomprom in a double listing shared between the LSE and the AIX, while making some cross-listings of mobile operator Kcell and Ferro-Alloy Resources.

The programme originally hoped to list many more major firms, including national carrier Air Astana and near monopolist of the local telecoms market Kazakhtelecom. At least five more IPOs of large state-owned companies were expected to go ahead during 2018-2020, culminating in a listing of national oil company KazMunayGas (KMG), which was expected to bring the privatisation run to an end. As things stand, it remains unknown when the clouds will clear for the next big IPO from Central Asian’s biggest economy.

The opposition-run web-based Kazakhstan 2.0 project, which offers anonymous analytical content, is one of the rare media sources that offer any kind of criticism of the AIFC and the AIX.

Kazakhstan 2.0 wrote in February that despite annual growth, the average volume of trades on the AIX, which stood at $3.7mn on a monthly basis in November 2020, left a lot to be desired.

“In our estimation, such turnovers are quite decent for a stock exchange operating in a rural area of Kazakhstan, but not for a strategic project implemented on behalf of the ‘Leader of the Nation’ [ex-president Nursultan Nazarbayev] himself,” it added.

“Moreover, we strongly suspect that the monthly maintenance costs of Astana International Exchange are quite comparable to its monthly turnover,” Kazakhstan 2.0 observed, implying that the AIX might be a net drain.

However, the analytical service concedes that some measure of progress still appears to be visible.

“The changes we have seen over the past six to nine months have actually strengthened the AIX position [in the eyes of] both global and domestic investors,” Kazakhstan 2.0 added. “We have seen interest rates decline globally and therefore there is a lot more interest in investing in equities. So, while the privatization programme has understandably been deferred, there is still a high level of interest in investing in Kazakhstan.”

According to AIX’s own December 2020 update, AIX issuers raised over $321mn in equity capital, including $104.7mn in 2020. The update also mentioned that AIX had so far listed 80 securities, including shares and global depositary receipts, bonds, exchange-traded funds and notes, and $8.6bn worth of debt capital ($3.7mn in 2020).

Some observers do appear to be keeping to an optimistic outlook on the AIX.

Independent financial analyst Adilzhan Kozhabergenov told local business magazine Kapital.kz in August 2020: “It can be assumed that if at least 10% of Kazakhstan’s companies with a turnover of up to KZT30bn end up listing [on the AIX], then this in itself would become a breakthrough for our market. In this case, investor interest in the real sector of the economy is likely to grow.”

Optimism or not, though, AIX's progress alone may not justify the creation and continued operation of its umbrella, the AIFC.

Kazakhstan 2.0 shared its belief that the AIFC itself is bound to fail due to it being “initiated and implemented by the state, and not born of the market itself”, adding that “for this reason it will not be economically efficient”. The analytical medium also viewed the Kazakh authorities’ attempt to create an “offshore zone in a thoroughly corrupt country” as grounds to expect “corruption within the AIFC”.

“Investments in the AIFC will not be tantamount to investments in the country's economy, moreover, they are unlikely to go outside the [AIFC’s jurisdiction] and will not have a positive impact on the level, efficiency and quality of the national economy, not to mention the standard of living for the bulk of Kazakh citizens," the analytical platform noted.

These criticisms of the AIFC are, of course, directed at the financial centre's viability when it comes to Kazakhstan's own prosperity, but even purely as an entity standing on its own the AIFC appears to have inefficiencies built into its basic structure.

One example can be seen in a 2019 travel report for OnFrontiers by a regional research analyst, Scott Osheroff, of Asia Frontier Capital's (AFC’s) Asia Frontier Fund.

"What was interesting is that in the 21st Century digital economy in which we live, companies incorporated in the AIFC are required to have a physical office location in Astana with employees in the office. Perhaps that partially explains why four months after the opening of the AIFC there were only 12 registered companies," Osheroff mentioned.

Worth noting is that the attempts to properly kick off the operation of the AIFC and the AIX have been distorted by the global pandemic in 2020 and 2021, thus only time will tell if the aspiring regional financial hub will deliver on its promises in the post-COVID-19 world.

How Kazakhstan shot to number three in the crypto mining industry

The massive release of “kompromat” focused on the country’s powerful church but also provided evidence of state snooping on journalists, politicians and diplomats.

Iran’s economy – less troubled than Washington would like, and turning to the East

Iran's economy is under pressure from US sanctions, but is not nearly as sick as US reports would make you think.

bneGREEN: Western Balkans power plants in doubt after China to drop overseas coal projects
12 hours ago
New study adds to Caucasus’ brag sheet: Cradle of lettuce
1 day ago
Shurnukh: face to face with the enemy in Armenia’s newly divided border village
2 days ago
Georgia flooded with leaked surveillance recordings of clergy
3 days ago
Iran’s economy – less troubled than Washington would like, and turning to the East
4 days ago