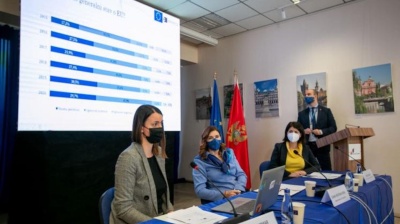 75% of Montenegrins want their country to become a member of the European Union, a poll carried out by the De Fakto agency showed.

This share is significantly higher compared to 2019 when EU membership was supported by about 66% of citizens, while 23% were against.

The research, commissioned by the EU delegation to Montenegro, also shows that, if a referendum were called now, as many as 85.7% of those who turned out would vote for Montenegro's membership in the EU.

"The greatest change occurred in the category of the so-called moderate supporters, whose percentages increased at the expense of the moderate opponents of Montenegro's accession to the European Union. A possible explanation could be that some of the citizens who had been sceptical of the EU before the August 30 Parliamentary Elections changed their views in a positive way, while those who had previously supported post-election integration did not change their views in a negative way," Olivera Komar of the DeFacto Agency said as quoted in a statement from the EU delegation.

The poll showed that for half of respondents the main reason to support EU membership is the expected better quality of life. Montenegrins expect a better future and improved standard of living, the possibility of travel and greater stability.

Montenegro hopes to join the EU in 2025 and is the most advanced Western Balkan state in the talks with the bloc. The new government, which is believed to be pro-Russian and pro-Serbian, has stated that EU membership remains its top priority.

Montenegro to protect wines with smart tags in pilot study

The National Bank of Ukraine (NBU) reversed its easing policy and hiked rates for the first time since June 2020 by 50bp to 6.5% at its monetary policy meeting on March 4.

Russia’s services PMI positive at 52.2, but down slightly from January

The seasonally adjusted IHS Markit Russia Services Business Activity Index registered 52.2 in February, down slightly from 52.7 in January. The latest reading signalled a modest rate of expansion that was slower than the long-run series average.

Better performance in Q4 left North Macedonia with a 4.5% GDP contraction for 2020.