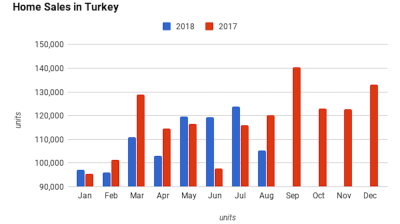 Homes sales in Turkey declined by 13% y/y to 105,154 units in August following the growth of 7% y/y registered in July, national statistics office TUIK reported on September 17.

August’s mortgage sales sank by 67% y/y to 12,743 units, compared to the 21% y/y fall seen in the previous month. The sole annual rise recorded for mortgage sales occurred in June, for which a rise of 35% y/y was posted.

Turkey has lowered the requirements that foreigners must fulfil to acquire Turkish citizenship in a move to encourage investment, according to new regulations published in the government’s Official Gazette on September 19. To gain citizenship, a foreigner need now only make a fixed capital investment in the country of a minimum $500,000 compared to the previous threshold of $2mn. Foreigners who have purchased real estate in Turkey worth a minimum of $250,000, instead of the previous minimum level of $1mn, can also now avail themselves of Turkish citizenship.

Pre-election stimulus
The government tried to stimulate home sales prior to the June 24 snap elections. President Recep Tayyip Erdogan, who was re-elected in the poll, has, meanwhile, shown no let-up in maintaining his unorthodox line that the country needs lower interest rates despite Turkey's currency meltdown and rocketing inflation. He did, however, theatrically bow to the central bank’s apparent independence last week when the rate-setters brought in a major rate hike. In late August, the government backed the latest campaign in Turkey to stimulate home sales.

There are a total of 1.5mn-2mn unsold homes in Turkey, according to sector representatives.

Home price growth way behind inflation
Annual home price growth in Turkey very slightly edged down from a revised 10.5% in June to 10.48% in July, central bank data showed on September 18.

In a worrying trend for home owners, the posted home price growth rate fell below the annual CPI inflation rate as far back as last September and has since stayed there.

Turkish inflation leapt again in August, soaring to a 15-year high of 17.9% y/y from July’s 15.85% y/y, TUIK announced on September 3. Given Turkey's ongoing currency crisis, markets see it passing 20% in months ahead.

The construction confidence index decreased by as much as 10.7% m/m to 68.8 in August, according to the latest business surveys by TUIK.

Expected further tightening in monetary and fiscal policies would weigh more on the construction industry which has already begun to show signs of a slowdown, the Contractors’ Association of Turkey (TMB) said on August 1 in its regular sectoral analysis report.

IMF estimates suggest that a significant share of domestic lending in FX has been to companies in the construction, real estate and energy sectors, whose incomes are presumably TRY-denominated as against their input costs which are FX-denominated.

Hakan Caglar, chairman of construction company Emay Insaat, told Bloomberg on August 1 that the company was in debt restructuring talks with lenders. Emay’s total debt was TRY1.2bn as of 2017 and the total value of its stock assets stood at TRY2bn, according to Caglar.

Ali Agaoglu, chairman of one of Turkey’s largest construction companies Agaoglu Group, on August 7 was quoted by Hurriyet Daily News as denying rumours that the company would file for bankruptcy. Agaoglu also said that the conglomerate was expecting $300mn from the sale of its two wind power plants.

Industrial production in Ukraine in October grows by 1.4% after month of decline

After a 0.7% decline in September in October 2021, industrial production in Ukraine returned to growth and grew by 1.4% compared to October 2020, the State Statistics Service reported on November 23.

Release of part of provisions made last year contribute to the robust profits in 2021.